Anto Kajinić / FROM LIGHT TOWARDS ENLIGHTENMENT

There are ten paintings that are being presented in the PhD exhibition by Josip Mijić, an academy-trained painter. These ten paintings allow one to observe a variety of traits, of which there are more than enough to convey integrity and contemplative abundance that are of key importance for the existence of artistic insight. The paintings tell the Old Testament story of the Creation of the World. The importance of this artistic endeavor lies not in plain sight, but is hidden in its layered and mysterious iconological depth: the one that enriches and fulfills, the one that is the force that makes a being unique from any other being, the depth that bridges the time gap between the source material and its interpretation in this exhibition, the gap between the Almighty and the artist.

The main tool of conveying and cognizing this depth in Mijić’s exhibition is none other than one of the most basic means of artistic expression: color. When observing the paintings in this exhibition there is one thing that is undoubtedly striking and unique, and that is the dominance of the color black. Darkness and black, The Beginning and Genesis. Is it even possible, in the context of the western provenance, to fathom and define, axiomatize and fossilize these motives, or does it suffice to just let emotion lead the way even if it does reveal certain “spiritual poverty”? It would seem that these paintings invite us to take the latter approach. Black is the color of doubt, the color of safe but incomprehensible substantiality – the color of ocean depths and cosmic infinity, the color of the night. This primordial black is what boils inside the womb of the world, preceding the very existence of life and ultimately giving birth to its many wonders. This vision of the black color as a warm and loving mother is a foreign one, it is so different from its usually negative interpretation and yet so familiar and right; for it is true that only in dark can the existence of light be realized, and same can be said of life. And so – in the beginning – there was light! And light there was and will be, but just like life, it too is limited, fickle and frail.  Mijić builds upon this idea in his painting Creation of Light by depicting light as a miniscule light bulb amidst the vast (cosmic) darkness.

In his paintings depicting the Creation of the World, Mijić utilizes black in two distinct ways: utilizing flat surfaces (both glossy and matte), which evoke memories of that which is transcendental, incomprehensible, metaphysical and foretold, as well as rough surfaces, which in turn evoke that which is empirical, material, malleable and measurable. This material dichotomy serves the purpose of forming a didactic structure within the painter’s plane of creation. The way Mijić approaches and constructs rough neoinformalist materials is especially impressive. When working with amorphous and inanimate bodies (like astral ones), he uses square shaped (angular) visual cells that carry a kind of rhythmical complexity that reveals a higher order of things, making every painting both coherent and convincing. These visual cells seem to be essential for the structure of the painting as they serve as building blocks for the carefully and patiently structured visuals. This sort of structured art gives an impression that unforeseen coincidences and surprises have no place in any kind of creation, artistic or otherwise. Behind every coincidence stands onirism and higher order of things, and it is this order that sets all creation apart from any other kind of agency. A myriad of quadrangular and spherical (circular) cells present in these paintings are a true testament to this. Angular cells are material, apprehensible and static, while spherical ones represent life, spirituality and the path towards metaphysical. Due to utter coloristic simplicity of the paintings, the author uses spherical visual cells in order to depict life in all its forms, emphasis being on the human one. He does so in order to mark the creative advancement towards higher, more perfect shape and in doing so, he displays a rare aptitude for peculiarity and authenticity while effectively creating a differentiation between the inanimate and the living within a coloristically indifferent reality. Mijić liberates himself from the vast capabilities of colorful expression and instead turns towards the world of absolute monochromaticity and asceticism where he, with the help of textural language, brings into being a world of uniqueness and authenticity, in both the general and the biblical sphere of interest, attaining artistic remarkableness, all the while staying true to himself.

By taking a textural approach to black color and challenging its materialness by utilizing visual cells, the author shines a light on how pointless and frail any attempt at providing a rational explanation for creation really is and instead instructs us to delve into the realm of contemplation. And in contemplation of the importance of the black color in the context of Mijić’s paintings we are met with a realization that black is an entity not yet seen. Black is not an absence of matter, in actuality it is an abundance that is boundless and bottomless. And in its bottomless depth hides the world of metaphysical that awaits us all once we free ourselves of the physical plane and brave outside of the safety of light, as the main role of light is to remind the precarious that there is darkness as well. It is for this purpose that the light was created, and He who created it must have known that the world He was bringing into being was going to be brimming with precarious, sinful, wandering, cold and harsh beings. And so in the beginning there was light!

But there is yet another light, one that is not visible to the eye but to the soul. In his Creation of the World, there is clear contemplative symbolism that stands for this sort of spiritual light: golden painting frames and the golden ratio. This gold-themed symbolism points to cognizance of a perfect, metaphysical entity, as both gold color and the golden ratio are rare, precious and therefore sacred. The way all paintings are “limited” by golden frames conceptually represents the finality of existence due to its intrinsic boundedness, but the fact that the frames are golden is symbolic in itself – gold color evokes feelings of absolute and eternal liberty, liberty that is painfully incomprehensible to human experience and apprehension. Even the choice to use golden frames for every last one of the paintings is telling as well, as it serves to symbolize the Omnipresence that is not meant to be explained but is merely to be believed in.

Of all the paintings in this exhibition, the one that best represents the aforementioned spiritual realm is the last, entirely white painting that depicts the moment of rest following the creation of the world. In it there is no textural language or any language at all, it is pure and untainted allowing for spiritual liberation from the chains of materialism borne not out of need but weakness. This moment of rest is indispensable for the spiritual recovery, growth and ultimately enlightenment and it is this moment of rest that is necessary for the darkness to preserve its metaphysical significance and integrity. And while the lack of textural language and black color sets this painting apart from any other in this exhibition, giving it a distinct quality of immense rarity and value, it too dons a golden frame, fitting neatly into the complex spiritual narrative woven into every miniscule detail of this exhibition.

In the end, this exhibition makes it undeniably clear that Josip Mijić has mastered the technical aspects of artistic expression, allowing him instead to focus on telling a refined spiritual narrative in an unprecedented depiction of the biblical Creation of the World in an (almost) entirely black environment. 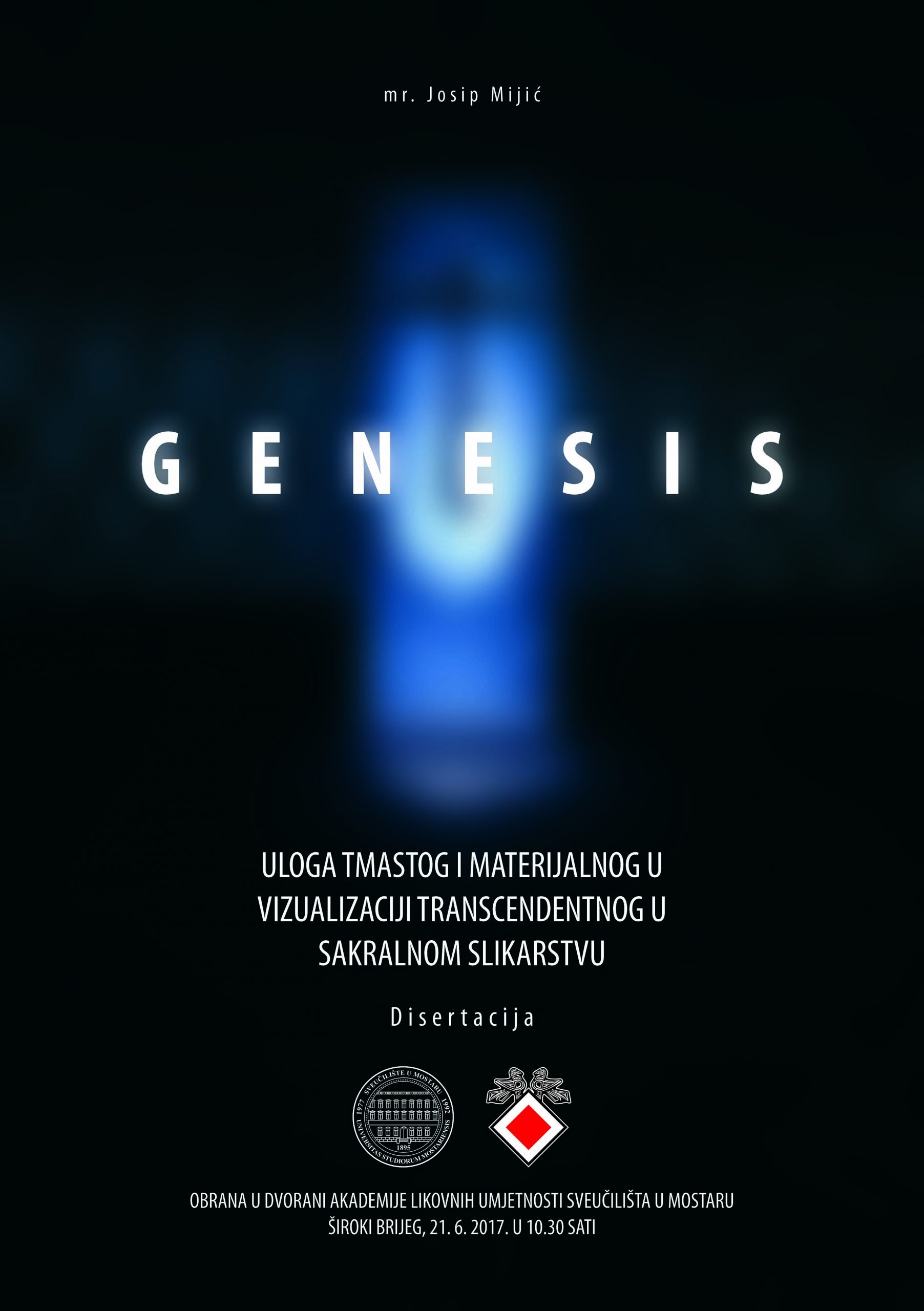